A christmas present, intended to provide the feeling of homeliness between two “near-distance lovers” in a hotel room on christmas eve. 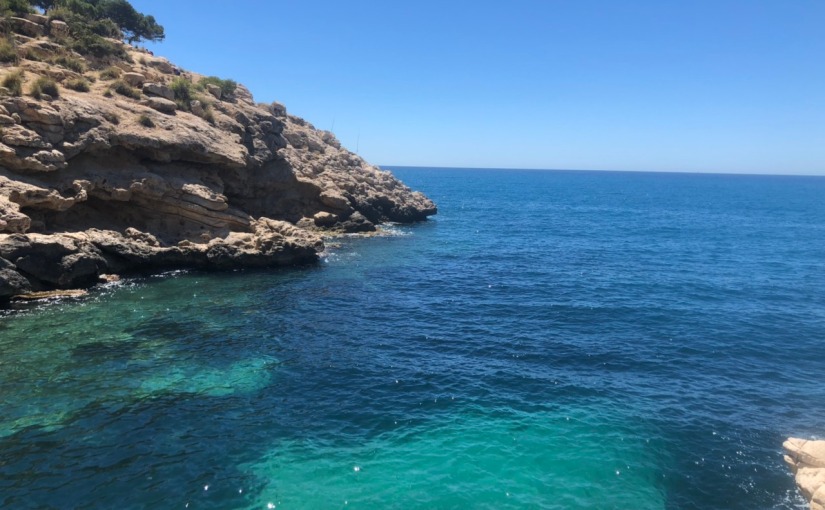 I had the luck that my wife bought me a new computer, mainly for writing my PhD on it, but Im going to abuse it for writing a text from time to time. It also helps me kill the time I spend commuting – I like travelling, but travelling to your job every day kills the joy in it a little, so you have to spice things up a little bit from time to time.

We went on a short trip (4 nights) to the south of Spain at the end of April, you could call it a playa-pit-stop, as we wanted to refuel on some Vitamin D. My wife has a friend with whom she studied together, so we had a place to stay, and we just bought the plane tickets and found some time for travelling. There was an upcoming holiday in Germany and D. used her god-given talent for finding cheap tickets and everything was set up.

We were staying in Elche (or Elx as it is written in Valencian – trivia time! Spain has one official language, Castilian or as we know it, Spanish, but there are other co-official and recognised languages, and Valencian is one of them), which is a City in the province of Alicante in the southeast of Spain. It isn’t directly connected to the coast, but if you rent a car, you will be able to get everywhere as the roads are pretty good (just watch out for roundabouts, they went crazy with them while building the streets). The buses will also help you out a lot, but the public transportation in Elche and Alicante can be confusing at times, as the bus stop are not labeled that well.

If you can’t speak Spanish, it can be a bit problematic, as some people don’t speak English, but there will always be someone who will translate something for you (or translating apps are also pretty helpful). The people are friendly, sometimes to a degree which I maybe found a little bit weird, but it sure is refreshing and a welcome change.

For example, we witnessed a drumming festival in the streets, and it was loud and vibrant. Everyone (people came out on their balconies) was having fun and danced, kids were throwing confetti, you know, the whole Spanish Salsa thingy everybody stereotypically thinks about what happens in Spain. To be honest, I needed a little time to get into it, as I found it strange for everybody to have fun just because they decided to. Finally, as I realised that I was the only weird dude standing under a passage in the street, looking at people having fun, while not leaving the comfort of my grumpiness, I also took it upon me to enjoy myself a little.

After some time, an older, really skinny Spanish lady approached me, and started talking something Spanish into my ear – mind you, I don’t speak Spanish – and rattled on about some stuff for 5 minutes, without even needing a word from me. As it goes, she really enjoyed the conversation and my efforts to nod my head in the most Spanish way possible. She ended the conversation with something about the “culo del mundo”, and a rather maniacal laugh. I think she either complimented the looks of my behind (in which case, gracias lady), or talked about hers, or got somewhat political in her rant – who knows, guess I will never really find out.

Elche is, as told to us from our friends (our hosts), the city with the biggest concentration of palm trees in the world. Im not gonna fact check that, because it sure feels like it, and I didn’t even know that things like palm forests/ palm groves exist. You should really visit the Parc Municipal, which is outstanding. It is a little Oasis in the middle of the city, where you can seek some refreshment in the palm shades and the water dispensaries in the park.

The food is also great. Some of the most known dishes in the world (for example Paella) come from this region (in and around Valencia), so you know they have a long culinary tradition to show. The paella naturally is a must try, but my favourites were the caña y tapas, which usually cost around 2,5€. The caña part is nothing else than an ice-cold, mostly local beer in a little glass (0,2l), and the tapas part is self-exploratory. The twist is that you can’t choose the tapas you will get, so it is a surprise everytime. 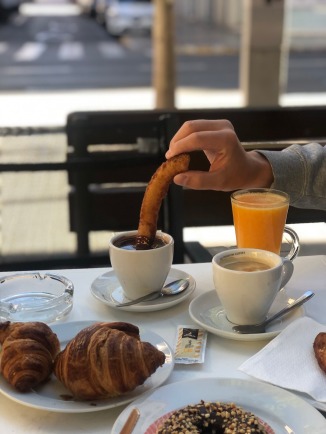 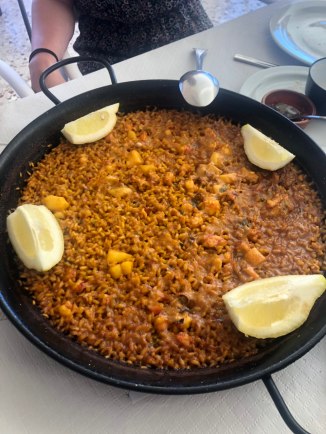 A typical Paella – it is served with aioli

And some little bites from a typical Spanish bar.

Considering the beaches, we visited 3 different ones. The one I found nice was the Cala Racó del Conill, a beautiful nudist beach, which I would really recommend. I don’t know how the nudist community feels about non-nudists at their beaches, but we were clothed and nobody seemed offended or bothered by it. It was also the only beach where we could really swim, so if you are there, and you are not bothered by naked bodies, it is worth a visit.

We also visited Alicante, a rather popular touristic place, with a lot of Food-Chains (It is the first European Taco-Bell I ate at), Restaurants where the servers try to lure you in and a beautiful stone-paved plaza. If you go west on the plaza, you will eventually bump into the Platja del Postiguet, a rather long sand beach. It is unique, because you have a two-way view: in front of you you will find the sea, and if you turn around, you will see the Castell de la Santa Barbara, a Castle dating back to the 9th century.

Sometimes you’ll hear a lot of people (for example most of my work colleagues) saying that these short trips are more stressful than useful because, as they argue, you have to prepare for them, plan everything beforehand and find some time in-between to relax. This is may be true, but even then just to some degree – for us, travelling somewhere doesn’t need to be relaxing. Don’t get me wrong, I don’t condemn you for always wanting a chill long summer vacation somewhere, but I think just changing the setting a little bit gives you head that long awaited change, which you oh so longed for while sitting in your office, with the same boring task you have to work on for the past 5 hours. And while maybe I won’t be as relaxed as someone who stayed at home, I would argue that the experience is more worth it to me.

A couple spending every possible moment in traveling and exploring new places together. 🎄 Welcome to our creative travel diary. Enjoy! View all posts by The Plastic Pine Tree