A christmas present, intended to provide the feeling of homeliness between two “near-distance lovers” in a hotel room on christmas eve.

We spent 14 days in Shanghai partly as we wanted to visit family and partly out of touristic reasons. Considering the fact that we had support from our family members that live there, some things were easier for us. For example, we didn’t have to think about where we’ll sleep, thus we can’t give you any recommendation regarding accommodations. We got a few tips what we should see and when, to avoid tourist overcrowding.

We came to China totally open to the idea of trying new food and experiencing a totally different culture. We used the metro every day (usually more than once per day), communicated with hands, legs and google translator (or other translator apps as you can’t really use google services in China – see Internet censorship in China). On a few occasions we were also scared, frustrated or overwhelmed. But all in all, that’s the point of traveling – stepping out of your comfort zone and sometimes, well, just surviving. 🙂

I made a few bullet points that we find important you should know before traveling to China, or what I would have gladly known before I traveled to Shanghai.

2. The bread is sweet. Yes, you’ve read it right. Bread in Shanghai is sweet. When there are seeds depicted on the package it should be salty, but it’s still too sweet in comparing to European bread we are used to. Street food is very famous, but most of the time you will have no idea what you’re exactly eating (regarding the ingredients). 😀 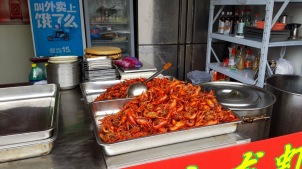 3. Chinese people (well at least those in Shanghai) drink hot water. In the plane, during the flight, in the airport and even with coffee they serve you boiled water. So, prepare yourself before you get burned.

4. The skyline is beyond beautiful. It’s very important to see it both – day and night.

5. WeChat is everything. WC is an application everybody uses for everything, but literally EVERYTHING – its western social media on steroids. They use it as social media, as a platform for finding jobs, to rent bikes, as a metro ticket and most important for paying. WeChat is connected to your bank account and you can pay EVERYWHERE with your mobile device. Of course, as a tourist you don’t have that option (as you need a chinese bank account to use this option), so sometimes when you give them cash, they don’t have spare change for you (happened at a hairdresser).

6. Chinese people often don’t speak English. Just use your creativity and speak using your hands, translating apps or similar. While ordering food we always chose by pointing towards pictures on the wall or in the menu. It can be difficult sometimes, but if you are not keen to learning Chinese, you should get used to it. The only place Chinese people will speak perfect English with you is at the – fake market.

7. Shanghai has it’s very own Disneyland. It was the first that we both visited and we were just amazed. Definitely worth visiting! The ticket price is ¥399.00 which is about 50 €. All in all, Shanghai Disneyland was a fun experience filled with creativity, adventure and thrills. Would definitely go back! 🙂

Hope this was helpful for you and you enjoyed our photos. (:

A couple spending every possible moment in traveling and exploring new places together. 🎄 Welcome to our creative travel diary. Enjoy! View all posts by The Plastic Pine Tree